Here is how I extracted honey from the three combs Rhona and I took from the hive in my backyard.  Just so you know, you never take all the honey, just some.  There were about 20 combs in the hive, and about one quart of honey per comb was produced. 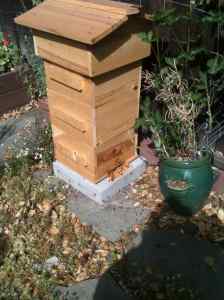 I think it is pretty.

Rhona installed the beehive, which is of a type called a Warre hive, and the bees on the day my father in law passed away—April 8, 2012, Easter Sunday. FYI, there was no second coming.  Rhona is a beginning beekeeper, so she was willing to take advice. Her first concern is for the bees themselves, because a bee colony is like a single organism, and colonies have been collapsing all over the place.

The first question we had to answer was “to smoke or not to smoke?” To harvest honey, you have to open the hive, and this can make the bees very angry.  Rhona opened the hive once before, months ago, and the bees chased her out of the yard and she got stung.  But she didn’t want to use smoke to pacify the bees because she thought it poisoned them and would weaken the hive.

I saw her point, but I did not want to get stung. So I read The Beekeeper’s Handbook,  by Diana Sammataro and Alphonse Avitabile, Fourth Edition. It said that the reason smoking the hive works is because bees communicate by smell. Smoke masks the alarm pheromones produced by the guard bees, so they don’t attack. It’s like cutting the power to an alarm system.  So that fact, and the fact that the person we borrowed a bee suit from ALWAYS uses smoke, convinced Rhona. She had a smoker, and agreed to use it.

We had to choose a day.  The time to harvest honey is between noon and three pm, when the bees are out foraging.  The day to harvest is when there are no gardeners, neighbors, dogs, or children around.  I figured it out with the neighbors, and we met at my house on the appointed day.  We put on bee suits—I borrowed mine, as I mentioned, from another amateur beekeeper. Then Rhona lit some egg crate cardboard on fire and put it in the smoker, which looked sort of like the oil can in the Wizard of Oz. She pumped smoke into the hive, and we lifted the roof off the hive. The buzzing coming from the bees in the hive, which was loud, got even louder and changed pitch.  But we were not attacked.

Rhona used her hive tool, which was like a small crowbar, to separate the “quilt,” the top section of a Warre hive which is located under the roof of the hive and packed full of insulation, from the other sections of the hive.

Under the quilt were three other sections, which were where the bees built their honeycomb that contained their eggs, larvae, and food stores, aka honey.

Working together, we picked up one section of the hive, which was full of bees, honeycomb, and honey, and carried it some distance away, and set it the section on a  clean Rubbermaid container.  Using  the hive tool again, Rhona cut around the sides of the one of the ten hanging honeycombs, and detached it from the board it was hanging on. The comb fell into the container, and honey began to ooze from the broken honeycomb cells immediately. But it was fine, because everything we were working with had been washed.  Rhona cut two more honeycombs out, then she picked up that section of hive and carried it back to the beehive.  She and I inspected the other hive sections and saw that the bees were healthy and had a lot of larvae developing.  Then we put the hive  back together, put the lid on the container with the three honeycombs, and after posing for pictures, took our bee suits off. I put the container in the garage, where it was cool and shady.

About three hours after we had put the combs in the blue Rubbermaid container, I brought my friend Anne in and opened the lid to show her the honeycombs.

“Ooooh,” she said, “there are bees crawling around in there.”

And so there were. There were quite a few bees crawling around, covered in honey, but quite alive. So I rescued them, and this is how I did it.

I got a small, maybe 1 ½ pint sized container that I put an inch of warm water in.

I put the little container with water, bees and clothespins in the sun near the beehive. In the morning the container had no more bees in it.

That night, I brought the blue container into the kitchen, and scraped some more bees off the combs and put them outside too. Most of those bees didn’t make it.

Then I had the honey and wax to deal with. I cut the caps off the combs with a sharp knife and tipped the whole container up at a sharp angle– almost vertical –so the honey would drain out of the combs and pool all at one end. That’s how I left it overnight.

In the morning, I cut the combs into little pieces, then used a metal ladle and serving spoon to scoop the honey into the paint straining bags which I put onto one gallon jars, and let drain for a couple of hours. I repeated this until the combs were all in the strainers. 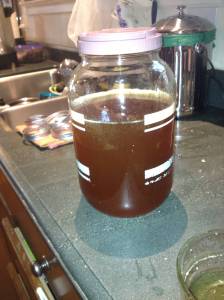 Finally, I twisted the strainers to force more honey out of the combs, then put the leftover combs in a couple of stainless steel bowls I had, set the bowls in a low oven (160 degrees Fahrenheit) so the wax would float to the top and the honey would sink to the bottom. This worked well. I added the honey to the gallon jar, and then decanted it into smaller jars. 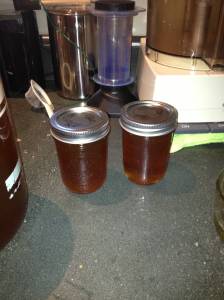 I traded the unrefined wax with Anita Rosen for a block of refined wax.

That morning at the farmer’s market, I bought the bees some flowers and left them in the backyard for them to feed on as a thank you. 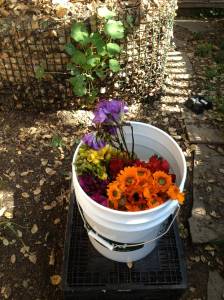 Author of a memoir called The Girl On the Wall, and working on a novel. Former Synagogue president, gardener, empty nester. Raising bees.
View all posts by Onecakebaker →
This entry was posted in Uncategorized and tagged Uncategorized. Bookmark the permalink.

From My Carolina Home

We read to know we're not alone.

Thoughts on the Dead

Site's Moved! Come on over to www.thoughtsonthedead.com

Marketing With A Story

Self-Care is Your Best Health Care

Big Jew on a Diet

Come for the recipes, stay for the irony

Cooking up great food for a healthy life

a blog by Erika Herzog

Life from the Sidelines

About a dog and the people she rescued.